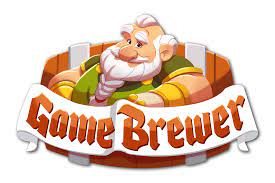 Gamebrewer
It's a big feast in the magical kingdom of Gloutama, where you take on the role of an ever-hungry halfling that goes to the market to gather all sorts of wonderful ingredients from elves, dwarfs, pixies, trolls, orcs and wizards, so you can cook up dishes that will have every creature in the kingdom licking their fingers.In each of four rounds in Festo!, players try to gather as many ingredients as they can by placing their servants by the different races in the game — but each round consists of two phases in which the players roll three dice that determine whether races are available this turn or not. Some races might be totally unavailable because of this, so players have to decide how many of their servants they want to place during each phase. Once this is done, majorities determine who gets what. Who will be the cleverest of all halflings? Play Festo! and find out!★ Fun colorful fantasy food theme for families and foodies ages 8+.★ Auction rounds and actions mean Festo! has high player interaction.★ Quick game play but a depth of strategy that equals replayability.Contents:• 1 Game Board• 1 Start Player Card• 3 Dice• 3 Cover Tiles• 24 Victory Point Tokens• 5 Player Boards• 14 Event Cards• 34 Dishes• 90 Ingredient Cubes• 30 Helpers• 10 Special Discs• 5 Player AidsAges 8+, 2-5 players, 60 minutes
Share Share on Facebook Tweet Tweet on Twitter Pin it Pin on Pinterest
x