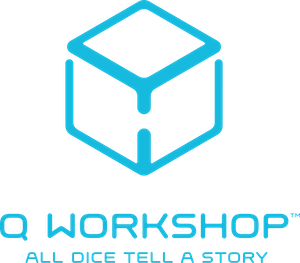 Sometimes there is to not enough space on Golarion so Space is the only choice for all independent spirits. This calling of cosmic adventures is center of the new RPG setting from Paizo Inc. - Starfinder. They give you the new worlds. Q WORKSHOP gives you the new beautiful dice. We hope that this set will support you against the new dangers that threaten the Pact Worlds. This RPG Dice Set designed and manufactured by our best designers was crafted for the Paizo's Starfinder first Adventure Path - Dead Suns. The sophisticated dice’s box contains seven polyhedral dice, engraved with beautiful sci-fi pattern, reminding of the distant galaxies, constellations, nebulae and cosmic dust. Blue dice, made with high quality plastic covered with orange paintings will instantly catch the eye of all players around the table and help them immerse in the new universe. Ready for the galactic adventure in the vast space? Roll those quaint dice and claim your destiny!

Dead Suns is the first Adventure Path released for Starfinder Roleplaying Game, featuring six episodes, with the storyline keeping players in suspenseduringwhole time of gameplay. Dead in the title means thrilling adventures, deadly struggles for heroes, and a threatforwhole universe. If your dice rolls are not successful not only suns will be dead. Each chapter contains new challenges to face, mysteries to solve and next step to doom or saving the galaxy. Feeling brave enough to take part in those quests? Move to the fantastic world of Starfinder. Grab your dice set and start playing!