Positioned along vital trade routes across southern France, the countryside surrounding the fortified city of Carcassonne is a hub of activity. Noble knights patrol the city streets keeping the peace as merchants peddle their wares in the market. Outside of town, robbers prey on unsuspecting travelers while monks and farmers live a seemingly idyllic life in the country.

For seventeen years, players have been able to explore this vast landscape in Klaus Jurgen-Wrede’s Carcassonne, the 2001 Spiel des Jahres winner. Each game transports players to medieval France where, using just tiles and some wooden meeples, they create an entire world brimming with possibilities. With its simple yet engaging gameplay, Carcassonne has captivated audiences from around the world since its debut in 2000.

When it comes to Carcassonne expansions, the first two, Inns & Cathedrals and Traders & Builders, are often regarded as essential inclusions. These were the first two expansions released and they set the standard for the excellence that would follow. These expansions add new strategic elements to the game's simple formula, making either of them a great first step into the larger world of Carcassonne.

With Inns & Cathedrals, players will discover new building types. Cathedrals will increase the value of a player's cities and inns make claiming roads even more lucrative. But placing meeples on these features can also be riskier than other tiles. Meeples remaining on tiles that use inn or cathedrals don’t score any points at the end of the game, making this an all-or-nothing proposition. Also included are giant-sized meeples that count as two meeples on whichever feature they occupy. By strategically placing one of these, a player can quickly gain control of a feature.

For its part, Traders & Builders creates entirely new goals beyond placing tiles and meeples. This expansion focuses on the humming commerce in the cities and countryside of Southern France. By completing cities with Goods icons and collecting the Goods tokens included with this expansion, players can earn themselves bonus points, possibly giving them the edge they need in final scoring. This process is helped by the builder meeple, who allows players to place a second tile immediately after adding one to the road or city the builder occupies. Finally, the farms of the Carcassonne countryside have begun raising pigs, and with the placement of these pig meeples they will increase their point values as well.

With the Carcassonne base game and first two expansions as a foundation, the Carcassonne Big Box adds even more diversity with nine mini-expansions, include the The Abbot, The River, The Flying Machines, The Ferries, The Messengers, The Gold Mines, Mage & Witch, The Robbers, and The Crop Circles.

Each of these expansions injects new components and unique twists into the classic Carcassonne gameplay. Some of these, like The River, alter the very environment upon which the players build. Others, such as the The Ferries, take concepts from the base game in interesting new directions by extending roads across bodies of water. 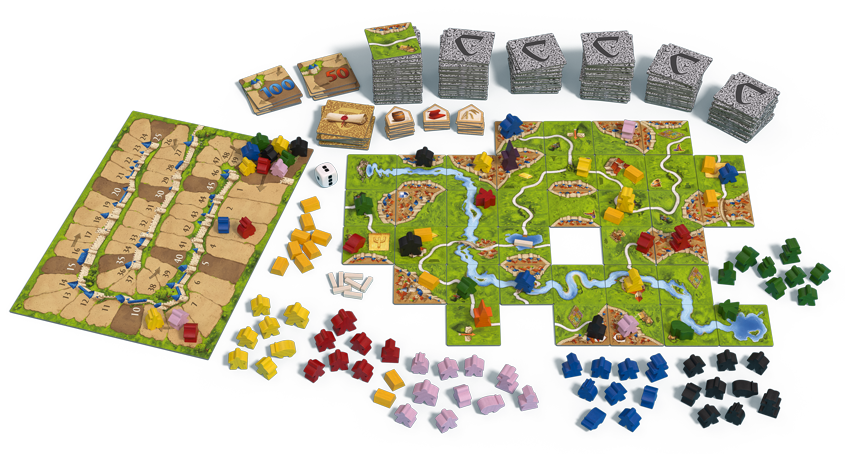 Still others fundamentally shift the nature of the game by introducing totally new concepts. For example, The Messengers provides each player with a second meeple on the scoring track. As these meeples advance up the track, they deliver messages, a new game mechanic that score their owners more points or allow them to take additional actions.

These mini-expansions can easily be added to a game, allowing players to experiment with multiple combinations for maximum variety.

The world of Carcassonne is filled with all sorts of fascinating new places to visit and people to meet. Its gameplay is simple enough to capture the hearts of newcomers and deep enough to challenge veteran gamers. Each expansion offers its own twist on the classic while staying true to the engaging premise that started it all.

Come and experience what this beloved game has to offer with the Carcassonne Big Box!